In 2013 Southern Housing Group appointed Durkan to deliver the regeneration of Lisgar Terrace in the London Borough of Hammersmith & Fulham.

Lisgar Terrace in Hammersmith and Fulham is an inter-war development that Southern Housing Group built in 1928 to provide homes for those who needed it the most. Last refurbished in 1970, the scheme has suffered from a long term lack of investment with building conditions deteriorating and not meeting current building regulations.

By regenerating Lisgar Terrace, Southern Housing Group aims to provide affordable and quality homes in an attractive and safe living environment to residents and improve the quality of life for existing residents, whilst achieving as many of the criteria for lifetime homes as possible.

Although not in a conservation area, Lisgar Terrace is flanked on either side by conservation zones. With this in mind, our client and planners alike were keen to retain the look and feel of the original scheme, enhancing existing features where possible.

Our objectives for the project were to:

The regeneration will be undertaken in five phases over eight years. To date (February 2018) the project has delivered the first three phases, with Phase 4 currently on site.

Durkan’s Resident Liaison Team has worked closely with Southern Housing Group to assist residents who have been temporarily moved as works are carried out in their homes and help create a smooth transition into their new homes.

All of the homes delivered through Phases 1-4 are for social rent. Homes in Phase 5 will be for private sale to help fund Lisgar Terrace’s regeneration.

“My mother moved here in 1928 and I was born in one of the flats upstairs in 1934. I have lived in Lisgar all my life, it is all I have ever known and it has made me very happy. I think the renovation is wonderful and I am very excited to move into my new home.”

Existing mansion blocks have been stripped back to shell and core, rewired, insulated and refurbished in order to comply with modern space and living standards for affordable housing. The communal areas have benefited from the restoration and preservation of period features whilst installing lifts and rooftop light wells that maximise natural daylight.

New family-sized homes (two, three and four bedrooms) have been created through remodelling and extending into new link buildings that have been constructed between each of the blocks.

The link buildings have been designed and constructed to complement the 1920s architecture whilst providing a visual break to the elevation.

In each of the phases, single storey slate mansard roof extensions have been added over the existing roof of each mansion block to create additional properties. Each extension is constructed as an independent steel frame, infilled with timber and supported on concrete plinths over load bearing walls below the existing roof level. 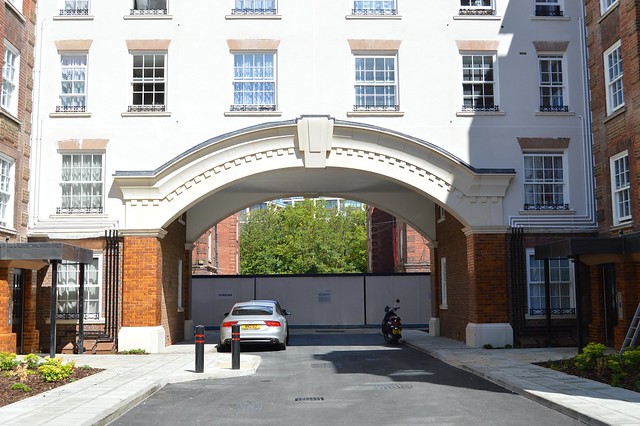 Additional landscaping works have created green pocket spaces and courtyards for communal use. Waste and recycling stores have been constructed alongside parking spaces and bike stores for residents.

All external improvement works – including the new road with traffic calming measures – were undertaken as part of Phase 3. This helped to reduce costs, accelerate work, enhance health and safety and reduce inconvenience and disruption for the local community.

< back to case studies

Do you want to learn more about this project, or about any other DURKAN projects?